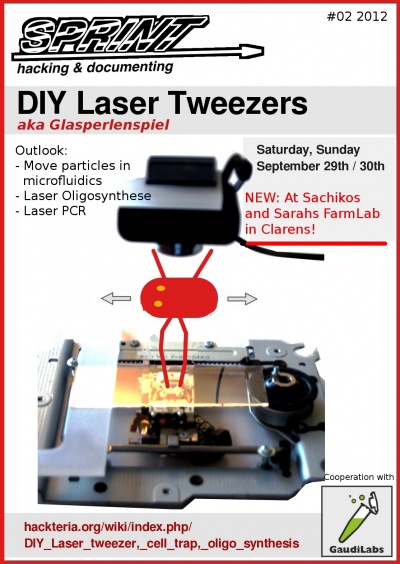 In a short and intense hack sprint we tried to reproduce the laser tweezer as described in the paper of A. Kasukurti, M. Potcoava, S.A. Desai, C. Eggleton, and D. W. M. Marr1,* - found here:
Single-cell isolation using a DVD optical pickup
http://www.ncbi.nlm.nih.gov/pmc/articles/PMC3169297/
To do so, a group of bio hackers, micro engineers, artists and theoretical multi-dimensional algebreic topology mathematician and a few lovely cats met in the FarmLab in Clarens near Lausanne. 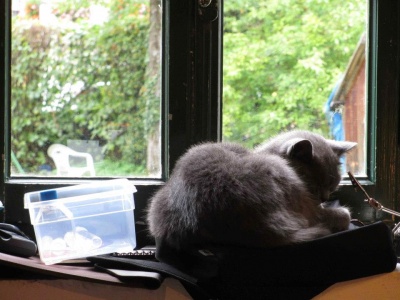 First we needed to harvest the lasers from old DVD Drives (Digital Versatile Disk).
For the experiment we need strong lasers found in DVD Burners with speeds 16x and up.
To know what you have got at hand, the following list is pretty helpful: 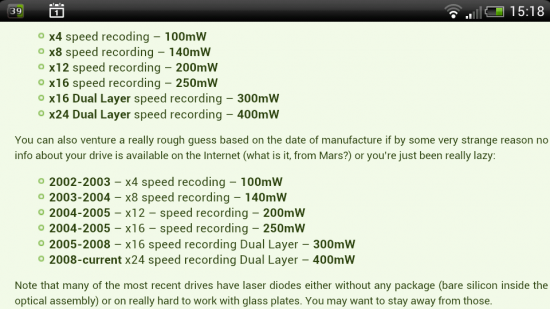 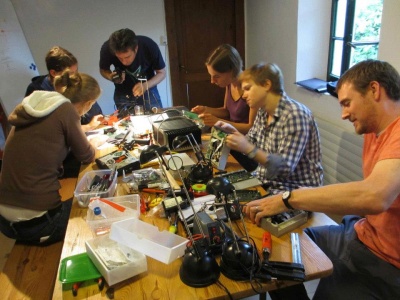 Everyone working hard to screw open the DVD housing. In the exterior plastic housing we found a metallic frame with the laser unit on a sled.
We removed all down to the laser sled, keeping together the metal cast with the laser diode and the lens with focusing mechanism. 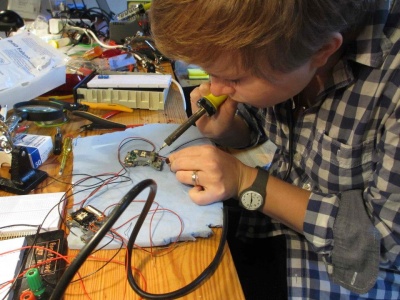 Once the laser were extracted we soldered wires directely on the pads of the laser diode and the focusing mechanism. 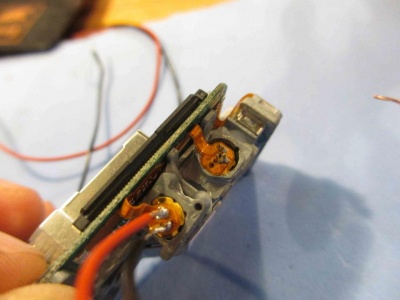 We found that the existing wiring (flex cable) does not need to be removed. Just cut the connections off to avoid interference with the existing ellectronics.

The powering of the laser turned out to be not so easy as the lasers are very sensitive to over current (and maybe shock).
The power supply we used first to power the leds was probably not stable enough and killed some lasers. This can be very annoying when the lasers are already integrated in some mechanical setup.

First Notes:
- The schematic in the papaer to power the laser uses an "unusual" pinout of the LM317. Refer to the schematic below rather.
- The suggested current of 350mA for a DVD laser diode is at the upper limit of what most of these laser can take (without extra cooling). So go slowly and expect to blow up your diode at 350 mA (what happend to me)
- Actualy the description of the diagram in the paper says 420 mA. When I recalculate the current (with R=4 Ohm and UAdj=1.25V (I=UAdj/R) I get a current of only 312 mA. This is probably a good value :-)
- Generaly laser diodes are quite delicate. When they suddenly get less bright then they are in the so called "LED" mode and kaput. 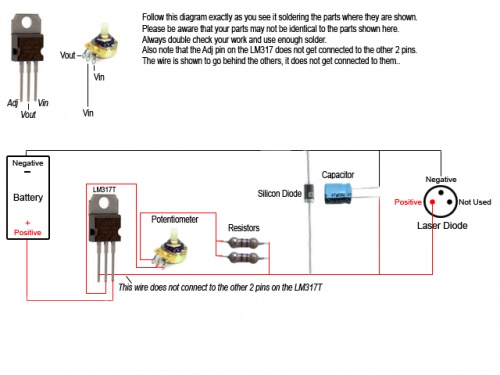 R=4 Ohm (in total) Pot= 100 Ohm or less.
We found the original schematic as described in the paper to work well and reliably. We powered it with a 4 1.5V batteries in a battery holder with on-off switch. 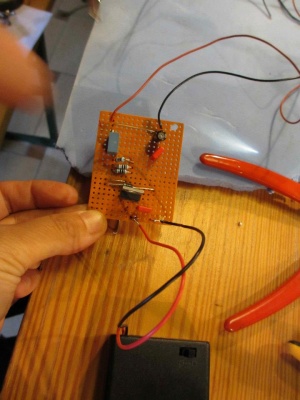 Electronics solder on a board. 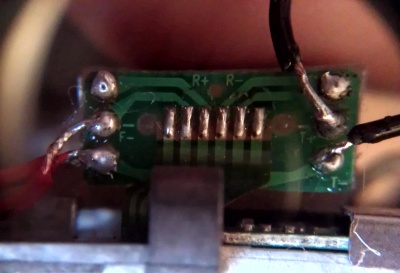 The lens is mounted on a precisely movable system with two coils. One is to move the lens up and down - the focus. The other coil moves the coil vertically - the translation.
The pins to connect are in most cases labeled with F for Focus and T for Translation.
The voltage to control the coils should be form around 0 - 1 VDC with a current of about 200 mA.

The mechanical setup proved to be not so easily. It needs to be stable, precise in aligning the different optical path and adjustable to focus the two focus points (camera and laser).

This is a schematic drawing of the mechanical setup with the components: Laser, Lens, Slide and Camera (Microscope) 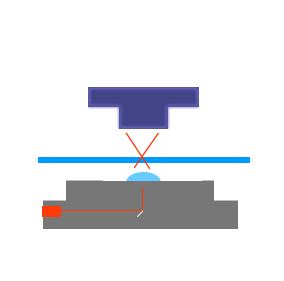 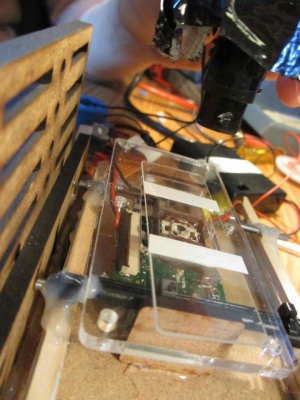 Part of the final setup with slide holder. 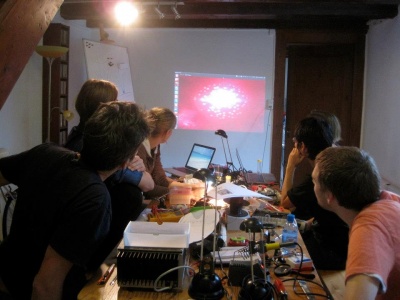 When we saw the first webcam microscope picture we quickly realized that the laser pointing directly into the microscope was a big issue. We tried with some cheap filter. Those turned out to be not efficient enough to filter the strong power of the burning laser. We even burned some filter.
We also tried to use the inbuilt short pass grid filters from the dvd laser-mounting.
These need to be installed in a 45° angle to filter out the red spectrum.
The filtering effect as can be easily observed when watching the spectral color reflections of a lamp on a CD looking through such a filter.
however they are not efficient enough either, and our webcam ccd image was still oversaturated and we could not properly see the beads anymore. 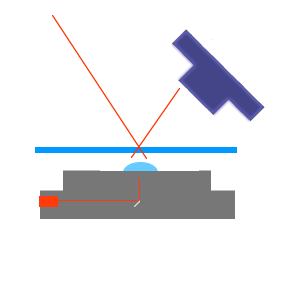 Since we could not find any better filter, we tried other setups. This setup uses an inclined camera. 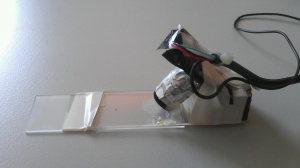 Still to much laser blinding. 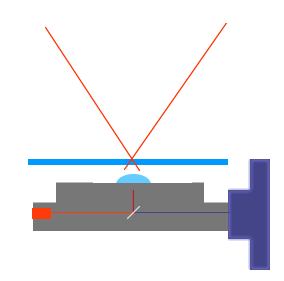 The next ideas was to use the existing optical path in the laser sled and to attach the microscope to where the laser sensor was.
This means the camera would look in the same direction as the laser and get less disturbed. 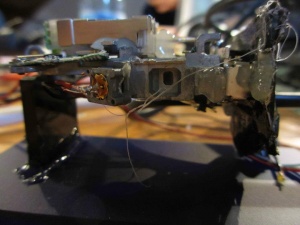 Unfortunately still not good enough. Reflection within the device and on the glass slide blinded out the picture again. 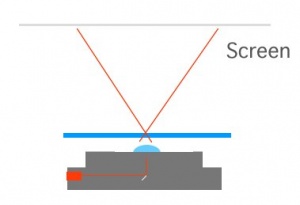 We found that the laser could be used to directly project the shadow image of the sample onto a screen (piece of paper). Like this we got to see the beads and we could even focus on single particle. When we focused well the laser got scattered and we knew that we hit the target precisely. Unfortunately we could then not "see" the particle any more on hat no control over the particle movement. 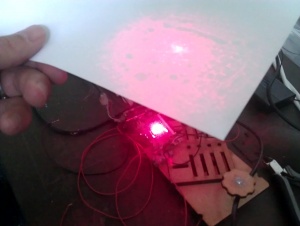 The objects to move arround

As object to move around we choose plastic beads of the size of 10 and 15 um. 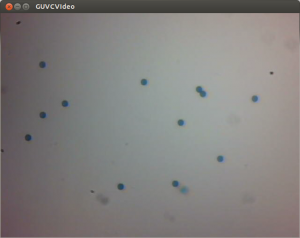 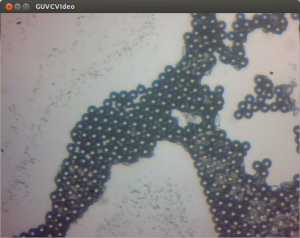 15 um beads. Most experiments were conducted on these.

A problem was, that the beads attached quite strongly to the glass slide due to entropic forces.
To reduce this effect, salt and soap were added to the bead solution.


Parallel to the mechanical and electronic setup we were working on some particle eating cells... 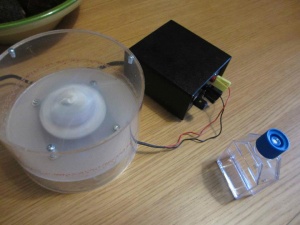