A crash course into multicopters (or drones)

Since recently, flying a drone has become easily accessed to more people. Outside the military purposes, drones can be used as art installations (Verity), aerial imaging/surveying (Wingtra) or lightweight transport systems (such as Amazon Prime Air). Recently, drones has started to find its purpose in medical field, mainly to deliver blood packages between hospitals in rural areas (such as (Zipline in Africa or [1] Swiss Post drone).

Comparison of Rotor and Fixed Wing

Multi-rotor drones are made of a central body and multiple rotors that power propellers to take flight and maneuver the aircraft. These usually have four rotors (quadcopter), but can have from two to six or eight rotors (resp. bicopter, hexacopter, octacopter). Once in the air, a multi-rotor drone uses fixed-pitch propeller blades to control the vehicle motion by varying the relative speed of each rotor to change the thrust and torque produced, allowing a unique range of movement.

Fixed wing drones are designed like more traditional types of aircraft — which look similar to an airplane. They are made of a central body that has two wings and a single propeller. Once in the air, the two wings generate lift that compensates for its weight — allowing the aircraft to remain in flight.

For this Medizintechnik DIY#Skill Share Sessions, multicopters are placed in focus. 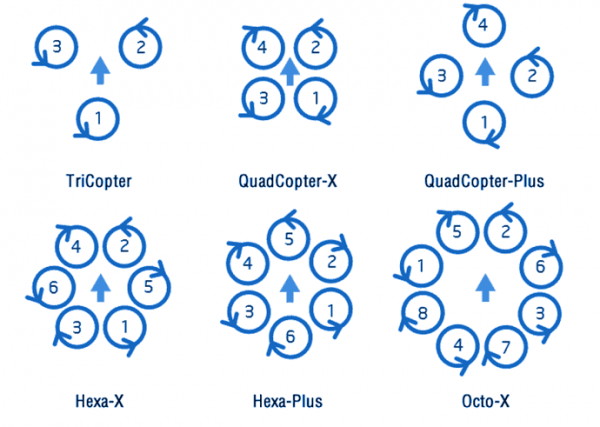