The frist NanoŠmano, NanoPunk and the Hacking of Future, second NanoŠmano – Šmall Matter and finally the NanoŠmano - LifeSystems was kinda the beginning of explorations into nano and bio, hacking and art, using microbes to make quantum dots and other nanoparticles.

"NanoŠmano Zine - NanoŠmano, NanoPunk and the Hacking of Future", published in 2010, as part of First Edition of NanoŠmano, Ljubljana. 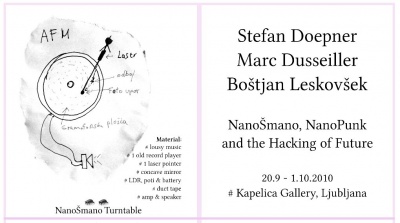 "In the second edition of NanoSmano, Stefan Doepner, Marc Dusseiller, Boštjan Leskovšek, Bengt Sjôlén and Erik Reimhult are starting new explorations into the world of matter on the nanoscale by investigating its physical and aesthetic potentials. As an collaborative and open research based workshop by artists, hackers and scientists, they want to elicit methods to enable the creative use of nano materials in critical and playful artistic processes. After 10 days NanoSmano collaborative exploring and experimenting on various topics of Small Matter in Public art-and-science lab for nanoscale materials and effects project NanoSmano team organised a workshop to introduce some basic DIY-projects and ideas on nanomaterials. They share their experiments by doing little DIY nano projects for interested artists/hackers/tinkerers. The topics, kuglica (particles), sajica (soot), mavrica (rainbow) cover some of the aspects of nanomaterials, such as their form, size and visibility in a microscope (kuglica), or their use as gas sensors based on carbon nanostructures in soot (sajica) or detection of various absorption phenomena with UV-vis spectroscopy (mavrica)."

There has been interviews and documentaries made.

A litte How to start a nanolab is also in the making, but still needs many inputs.