Last week, after learning to build the amplifier circuit using a breadboard and other prototyping boards, we were asked to come of with method of teaching this same circuit to someone who knew nothing about electronics.

We all started out making our own initial ideas.

I came up with the idea of children role playing as different parts of the circuit while creating obstacles with either props or physically with their bodies. The objective of the game is for the child representing the flow of current to complete the circuit by making it from the Positive terminal of the battery to the negative. 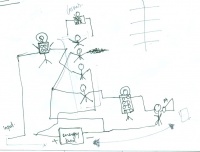 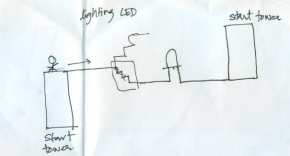 As a group, we decided to write a story for children in which the different characters and landscapes within the story would represent the different components of the Amplifier circuit. 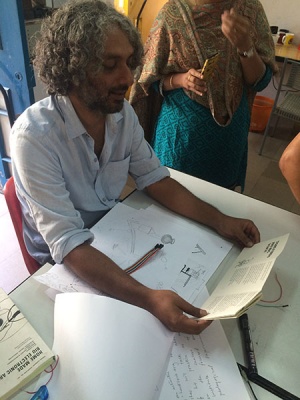 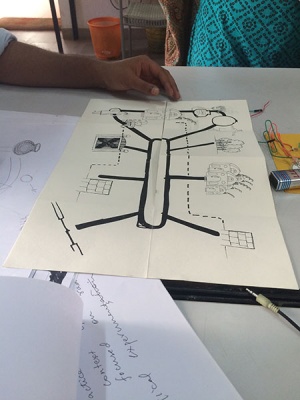 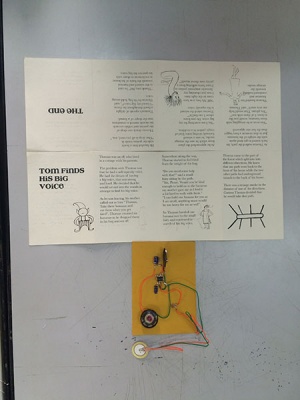 We came to the collective conclusion, that the story was rather abstract and that it was difficult for anyone to make a direct connection between the story and the circuit. What we liked about it was the use of metaphors and we wanted that aspect of the first prototype to also continue on to the second prototype. 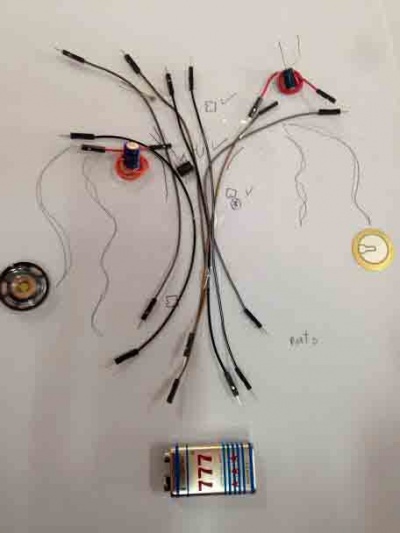 The core idea was to make a circuit with which you could listen to the sounds of the tree. The circuit was designed such that the child just had to connect the wires in order to make the circuit work.

<<Images of the sketches, aswell as the first prototype of the tree>>

Text to support the circuit

Sometimes there are things we cannot hear. Maybe it's
because we aren't paying close attention or that the
sounds they make are too soft for us to be able to hear them.


What if the tree was trying to talk to us and
we wanted to be able to hear what they were saying?


We could make that circuit which can make the sounds of the tree audible to us.


The roots of tree are the source of all energy that is needed by a tree.
This is much like the battery that will power our circuit.


A circuit is nothing but a combination of different objects
having their own function through which energy can flow continuously.


The fruits that are given out by the tree are actually small
amounts of energy that is being stored by the tree.
The capacitor works much like that. It stores a certain about of energy
in itself as the energy flows through the circuit.
There are big capacitors and there are small capacitors.
Depending on the size, they store energy accordingly.


The tree itself is a complicated system containing a lot of elements that play different roles.
The branches of the tree takes the energy to different
parts of the tree. Its job is to distribute the energy.
The integrated circuits are made up of smaller circuits all combined to do one thing.
In our case, this particular IC makes the sound passed through it, louder.
In other words, it amplifies the sound.


We are going to give the tree a microphone to talk into which will then go through the above circuit
and come out through the speaker from which we can listen to the sounds that the tree makes.


So what is the tree saying? 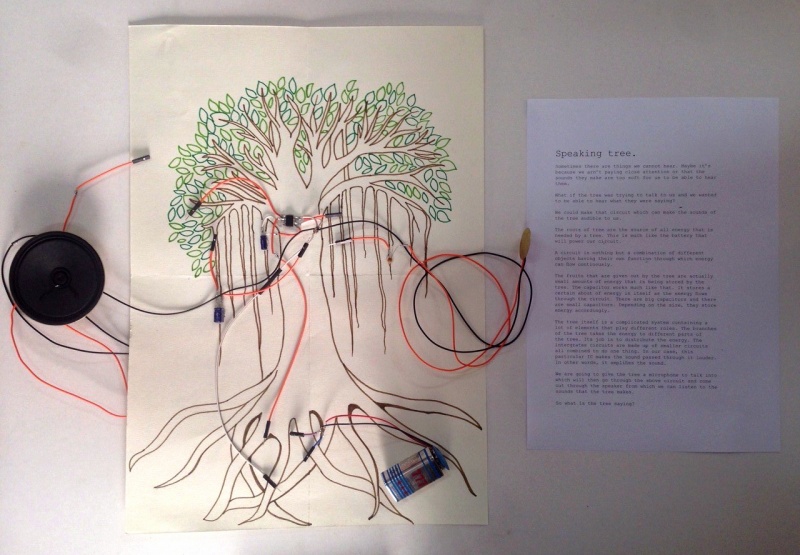 The circuit looked more complicated than the first iteration. There was no unity in circuit and the text. The prototype doesn't teach the person how to make the circuit.

However, the conceptually the speaking tree was much stronger. Explaining the circuit in connection to a natural phenomena as well as writing the text in a way that it could be actually used to listen to tree was an interesting and a huge step.