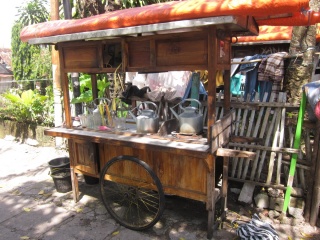 Presentation/Discussion : DIWO, Citizen Science and Hacktivism in Art and Design / Science and Technology

With "Hacking Angkringan" we want to achieve a unique interaction between the kitchen, the lab, and the street. Kitchens are privileged spaces, where our research into what is the world made of and how matter relates to our stomach and body not only originated but also from where it developed into present day labs. Homo sapiens is a culinary primate according to Richard Wrangham (Catching Fire: how cooking made us human), to which we want to add that he is also a lab and science primate, curious and hungry for new knowledge and techniques of probing the world around. Cooking is our first technology that helped us digest the world around and make it taste better, which is after all also our mission in science. Back in the 16.century the scientific labs emerged from the alchemist's kitchens and these artisans’ experiments always involved not only observations but also tasting. Labs slowly developed into specialized places, where we probe not only edible substances but all types of materials, many of them dangerous to our fragile bodies and taste buds, which probably created this image of the lab as a place outside of citizen control and knowledge, which mysterious policy makers regulate and protect us. Only in recent years we are starting to witness a reverse trend with molecular gastronomy trying to merge the kitchen and the lab again into hybrid spaces with experiments that taste. These often snobbish places and practices are using scientific techniques and knowledge about how food and molecules behave under various conditions to create new edible experiences.

We want to fight the snobbish molecular gastronomy with DIY messy gastrohacks and let the kitchen converge with the lab on the streets of Yogyakarta, a source of our inspiration and model for the future science – society interactions. The mobile push carts, angkringans etc. omnipresent on the streets of Indonesia are the first and most elaborated mobile food laboratories connecting science, art, and food. Angkringans are kitchen labs because they allow everyone to see and learn how to do something with food and various substances that doesn't happen in nature, to modify matter by cooking and mixing various ingredients so they taste well, and then to offer it to various people to get feedback. They connect the whole city through tastebuds and food preferences for certain cooking style and meals. These science-food laboratories on the streets of Indonesia are keeping the idea of citizen science alive and tasty because they let everyone be part of the cooking and providing feedback on the process, an immediate and honest real peer review process. They also allow people to interact with each other while the meal is prepared and while they eat and discuss all important matters. We simply think that angkringans are the perfect media for citizen participation in science, they offer the model, the tool and the space how to democratize science and make everyone part of a decision making and assessing science. The DIY and DIWO approaches in citizen science projects are embodied in the street food culture of Indonesia, which we believe should serve as a model for all citizen science initiatives. Citizen science needs to go to the streets, it needs to taste and involve people in a very visceral and embodied way. We need mobile labs, wearable labs to bring the science experience back its roots which is curiosity about the world around and how we can digest it and transform all energy into something creative. With our project we hope to remind this culinary primate, homo sapiens, that tasting and probing the world around and sharing knowledge with others is our true nature. We also hope this to be tribute to the alchemist that made the first connection between cooking, distilling, understanding and playing with the world in their kitchen labs, but also to angkringans and all mobile cookers in Indonesia that offer such powerful metaphor for citizen science.

Hack it into a bar 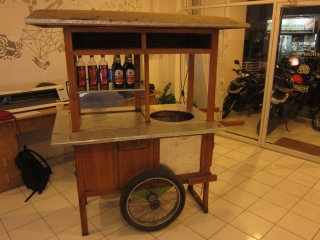 Hack it into a lab

That's the real task for the next couple of days!

- the bath needs to be COLD and you start with the bath: why?

- Pipetts are fun, we even tried invisible nano-spheres, hacked a funny technique how to make fast spheres with tubes and other messy ways.

- measuring pH worked but it doesn't make sense if you are never certain how well you blended the mixture.

- strawberries somehow lost their color and didn't taste that great, guava wine was great, seems like alcohol is always a good idea.

The moving portable lab goes to the street, and everybody can join and do their experiments at the lab [during the day], followed by the closing party at ISI.

Mobile food culture from a design perspective. Existing forms of mobile food culture in different countries? New forms of mobile food interaction? Relation between mobility & plurality of food? What is a good push cart? What is bad? Push Cart Pop-Demographic: Which trucks, carts and food is popular where and why? The design of the trucks: Who does that? What it expresses? City as an organism in which mobile food trucks function as some energy delivery mechanisms? What holistic, larger functions these mobile trucks serve? Bringing diversity, connecting city & parts over taste? Tuning streets into restaurants? Forms of picnicking? Public, political function? Context: Kaki Lima, Push food carts, Compact walking restaurants, Pikulans Predecessors of the trendy food trucks in US http://mashable.com/2011/08/04/food-truck-history-infographic/ Revival of a mobile food culture in the west? Street food in Indonesia is more evolved, very plural, rich http://indonesianfoodculinary.blogspot.com/2009/06/indonesian-street-food-stall.html

Where is it used? Why is important? Intro into design methods. Go to the streets. Take picture, observe, do small interviews.

What is typical? What is unexpected, different?

Special cuisine based on the location the food travels?

Food as a medium of stories?

Describe and document new scenario of use.

Spherification techniques in molecular gastronomy have provocative philosophical, mathematical and political context discussed by the German philosopher Peter Sloterdijk in his three volume magnus opus, trilogy "Spheres". Spheres connect issues of colonization, globalisation and science as a search for the ideal, universal, perfect and symmetrical shape, which is also the ultimate means of total control of the globe, knowledge, matter and people. The new, molecular gastronomy techniques of preparing food by changing their "state of matter" into spheres, foams, gels and powders we are creating means to hack this idea and show a different ontology, design and politics. The surprising transformations of liquids into solid matter or solid things into liquids make spheres just easy to make from anything and just one of many ways how to play with nature & matter. We will use a hybridized, DIY version of spherification technique and apply it on and Indonesian traditional recipe but also fruit. We want to make the familiar unfamiliar both in terms of expectations people have about traditional, Indonesian dessert, and by showing how posh cuisine can become part of street food culture. With our vernacular cosmopolitan recipe and practices (Dragon Cassava - Mutiara Buah Naga: Culinary Tribute to the year of the Water Dragon) we will perform our basic hypothesis that hybridization in terms of culture, nature and any type of matter is the base. Food is the best material on which to show how there is always an active processes and stories of hybridization, cross-pollinations and mutations, that are global even if they are not "spherical". We hope to hack and deconstruct molecular gastronomy but also modernist ideas of science and politics and define food as a perfect material for cosmopolitical mess(ing) which allows humans and non-humans to experiment with various new geometries and relations referring to another French philosopher, Bruno Latour, and his ideas of what are networks. Spherification of traditional drinks and fruit on our mobile food push truck (angkringan) is a small cosmopolitical ritual and performance connecting science with the streets to figure out new networks and possible scenarios and situations.

In one of his interview Sloterdijk defined spheres as ultimate means of control (http://www.bookforum.com/archive/feb_05/funcke.html): "First the universe was globalized with the help of geometry, then the earth was globalized with the help of capital." By using foams, powders and hybridized spheres we can experience new ideas of the universe and the globe, new cosmopolitics. By bring lab science and posh spherification technique of molecular gastronomy to the streets of Yogyakarta and with the help of the local, ubiquitous and traditional medium of city metabolism (food trucks and angkringans) we are preparing a ground for a more radical revolution connecting science, design, philosophy and politics. DIY mobile science together with indigenous knowledge, practices and objects means not only taking back the "means of production" as Marx hoped, but bringing forth a real, makers and tinkerers revolution, a revival of mechanical arts, alchemist and artisans. We want to support Sloterdijk's "polyspherical" and "foam" notions while refusing their immunological effects as scientifically naive: "I have thematized the modern world in terms of a theory of spatial multiplicities. I begin with the idea that the world is not structured monospherically and all-communicatively, as the classical holists thought, but rather polyspherically and interidiotically. At the center of this volume is an immunological theory of architecture, because I maintain that houses are built immune systems. I thus provide on the one hand an interpretation of modern habitat, and on the other a new view of the mass container." Against his containers we are placing our polyspherical, "foam" structured, mobile angkringan, which brings constant exchanges between humans and non-humans via its microbiological lab introducing with visuals and sounds bacteria and other scientific facts into everyday, street context. The spherification of local guava and otehr wines and fruit brings science protocols to our palates. It makes unexpected connections between pleasure and knowledge, food and science, traditional and globalization cultures combining anything with anything else.

Foreword to Theory of Spheres:

Think about which technique would be easily performed in a push cart?

May 2011 workshop in Prague

We hacked a typical Indonesian style dessert, Sago pearls (Bubur Mutiara – literally Porridge pearls) into Dragon Fruit Pearls. By using so called spherification technique from molecular gastronomy we turned cassava into dragon fruit and transformed the typical red tapioca based starch pearls into light and delicious red dragon fruit pearls (buah naga). We tested the spherification technique introduced by the famous el Bulli restaurant in 2003 on the streets of Yogya in traditional, mobile food push track (angkringan) setting. The controlled jellification of a dragon fruit liquid forming red spheres is our culinary tribute to the year of the Water Dragon, which is supposed to combine just like our dessert the wild and enthusiastic qulities of the red color with the nurturing and calming qualities of the coconut milk in which the pearls are served. We changed the pandang leaves base of the coconut milk (santan) into fragrant sweetness of palm sugar (gula melaka) base which serves better the mild sour taste of the red-skinned draon fruit rich with Vitamin C.

“Pearl sago closely resembles pearl tapioca. Both typically are small (about 2 mm diameter) dry, opaque balls. Both may be white (if very pure) or colored naturally grey, brown or black, or artificially pink, yellow, green, etc. When soaked and cooked, both become much larger, translucent, soft and spongy. Both are widely used in Indian, Bangladeshi and Sri Lankan cuisine in a variety of dishes and around the world, usually in puddings. In India, pearl sago is called javvarisi, sabudana (Hindi), sabbakki (Kannada) and saggubeeyam (Telugu) among other regional and local names and is used in a variety of dishes such as desserts boiled with sweetened milk on occasion of religious fasts.”

Cassava is (main source of food carbohydrates in the tropics, basic diet for around 500 million people) https://secure.wikimedia.org/wikipedia/en/wiki/Cassava

There is already a lot of tipps, instructions and inpirations on the wiki, go and check the Main_Page

what would jesus do? 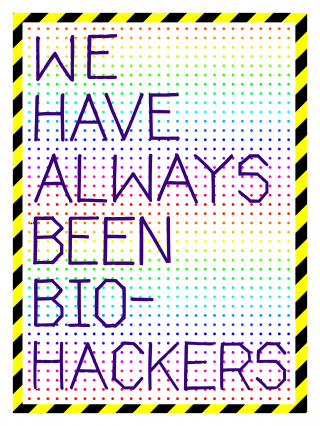 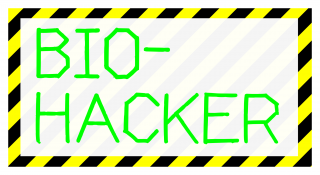 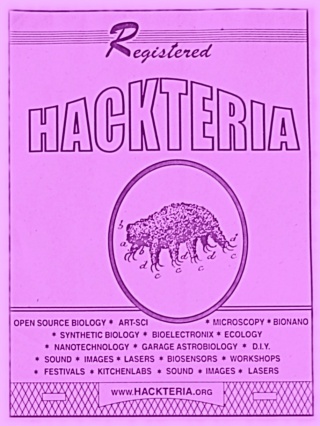